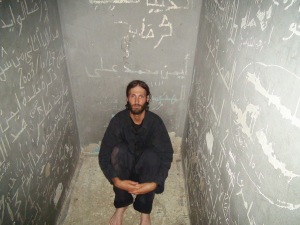 The first distinct feature that meets the eye as you walk into these cells is the tiny opening acting as a window located right opposite the door from which you walked in. Shaped in the form of a rectangle and fitted with squat firm bars, it’s so minute a knocked up rat wouldn’t mosey through it without risking a miscarriage. It’s this miniscule opening that will serve as your source of air till mother luck smiles on you and you’re released from this hell-hole.

The cell setting itself doesn’t do much to quell my already foul mood. The walls look like they were last painted when Apple and Blackberry were just fruits. Inscriptions of blokes who previously spent some of their hours in here and wanted their legends to forever remain told reign the walls. “Otieno was here, 2011-2012”, reads one part. Funny how not even a year behind vile correctional facilities as these can scrape a Luo of his pride. But we don’t say!

The room looks no bigger than a bachelor’s shack. More than a dozen pair of eyes stare as we stroll in. “Welcome home”, they seem to be telling us. Home indeed! Given the number already in here and the ones walking in now, quick math tells me there’ll soon be limited space so Daniel and I hurriedly squeeze ourselves at some spot next to one of the corners. Albeit standing, we try to get as comfortable as we possibly can. Home, again, Yes? The officer locks the door after us. It’s something past 1:30 p.m. now. The morning looks so near yet so far. In the meantime, as far as the night is concerned, Daniel and I are prepared for the worst but still praying for the best. Anything goes in here. Boondocks will teach you about the only rule to live by in jail, Don’t drop the damn soap! Pun intended. I had accepted the possibility that I could be robbed or beaten half-dead in here, but I’d have to be fully dead and six-feet under before anyone tried sticking anything up my ass. Not in this lifetime. You can take that to Faulu Kenya or Kamiti Maximum!

We’re all strangers in here, so it’s only natural for there to be some awkward silence the first couple of minutes or so. 98% of the folks in here are students, all wrongfully arrested. Then there’s one being held for stealing a laptop, and another who never mentioned his crime to anyone. All we ever knew about him was that he’d been here longest. Even the cops addressed him by name and he was accorded a few pleasantries we weren’t, like a shopping bag of bread, milk, tissue paper and a bathing soap at dawn break. Then there were two or three nduthi riders arrested for staying out past curfew time and presumably being under the influence.

Then out of the blue, the laptop thief and the veteran [he who had been here longest, I called him that] start harassing this nduthi guy over some cigarettes that he’d apparently promised them. When he said he didn’t have it, he was asked to fork out fifty shillings. When he said he didn’t have that either, even his screams for help from the officer at the OB desk couldn’t do anything to stop the multitude of blows and kicks that came pouring down on him like hailstorm. And boy did he scream! By now Daniel and I are probably thinking we’re next so we sit down on the floor, rest our heads on the knees, cover the heads with our hands and just feign oblivion to the present situation. This is the part where you drift to a sound slumber hoping you’ll wake up in the morning, only to find you were asleep a measly five minutes. The irony of Time is, it moves with baby steps at your worst and only flies at the best instants. Like that moment when you’ve chilled with your bae in your room for two long hours and then when you finally decide you want to hit it, your roomie walks in howling like a retarded seal. The people we call friends!

Morning came and we were served cold tea, Daniel and I forfeited it. We were then taken out of the cells and a roll call conducted. Just as everyone thought we were being let go, the cop in charge told us to “get comfortable” as we were probably going to be locked up till Monday. Outside, the demonstrations were evidently still on, going by the melee at the station. During lunch, we were served a plate of Ugali and cabbage that looked like it had just been dipped in a trough of cold water and placed on the plates. Daniel and I went without that too. By now we’d decided we weren’t going to take anything as long as we were still in here. If they were going to keep us here till Monday, so be it. But the only way this shit was going into our tummies would be if they cut us open and stuffed it in there. Straight talk!

We talked about the first thing we’d do when we left this place. Daniel says a cold shower would do for him. Me? Well, an ice-cold mineral water. Having gone a whole day without anything, I was both thirsty and hungry as hell. But the hunger would have to wait. They say you can go a week in the desert without food but only three days without water.

Then the cell doors were opened and the officer called out Daniel. He, either, had a visitor or someone had come to bail him out. I wished him all the best after, of course, telling him to remember us too. The door was once again opened twenty minutes later and Daniel was ushered back inside. When I asked him who it was that had come to see him or what had happened, he first burst out into a loud disturbing laughter before telling me.

See, Daniel comes from a kinsfolk of top-dogs. His big brother was an Embakasi West MP aspirant in the last elections. He also founded some organization that protects children [or is it women?] rights and is currently the head honcho at another. This is a ninja who has once single-handedly triggered a jam in town because some inane traffic police officer had tried to flag down his custom-plated German machine. Cops, know people bwana!

His cousin is no stranger to the showbiz industry. The mohwak-haired soft spoken chum acts in a local soap opera, models and is also a KLAD House Ambassador. His sister, well, besides being a well-known a model/video vixen, let’s just say that mamsilla can paint the dance floor red.

If anyone had come for Daniel, it had to be one of these jamaas.

Given that look on his face, and going by the fact that he’s back here and that suspicious laughter he just dropped, am guessing thing’s aren’t any rosier. You know those laughs you give when shit is real but you’re trying to convince yourself all will be well? Eehh!

So Daniel tells me the visitor had been the big scary brother himself. That explains why the officer in charge had seemed a little shaken when calling him out. He didn’t push and shove him around like they did us previously. But that’s not even why Daniel is laughing. Apparently the big man had only come to confirm that his dear beloved younger brother had indeed spent the night behind bars, after which he’d laughed at and mocked him to his face before ordering the officer to take him back to the cells, for the simple reason that he wanted him to learn a lesson. Of course he sent a confidante of his to bail him out later on in the evening, assuming he’d have learnt his lesson by then. Sir, this is generation X. The generation of selfies and social media. All we know how to do is get wasted, have random sex, post photos on Instagram, like each other on Facebook, troll Ole Lenku on twitter and repeat. All day. What lesson? Puh!

We had been locked in at 1p.m on a Friday and freed following the intervention of our outgoing student organization Chair on a Saturday at around 7 p.m. That was 18 long hours of frowny faces and pressy asses. We came, we saw, we left. My goons tell me am a man now. I don’t know. Chacha, Austin and your gang of Musketeers…can I drink at the high table now?

2 thoughts on “BEHIND BARS III: 18 HOURS OF UNREST”